The Lost Prince – The Habsburg Saga 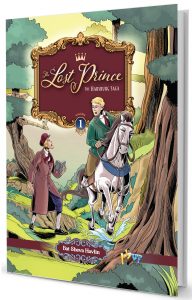 The year is 1875, and the Austro-Hungarian Empire rules over Europe. A future of power, glory and wealth lies before Crown Prince Rudolf, the Empire’s sole heir. But deep within him, a sense of emptiness gnaws at his heart.

Then, a chance meeting between Rudolf and Isaac, son of Vienna’s chief rabbi, changes both of their lives forever.
Meanwhile, the Church threatens to remove newly gained freedoms from the Jewish community, stirrings of rebellion threaten the Empire, and mysterious enemies roam Schönbrunn Palace.

Throughout it all, Rudolf and Isaac must unravel the most difficult question of all: Who they really are.

There are no reviews yet.

A Yiddishe Kop #3 by Gadi Pollack is now available in stores! Buy it on Amazon here Dismiss